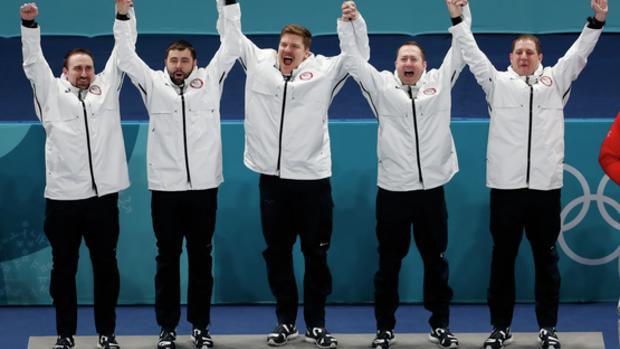 What I've learned about life over the past 6 years of curling and how it applies beyond the icehouse.

I’m finally coming down from the high that was the US Men’s team winning gold at Pyeongchang and have been sitting on this blog post for awhile (like, upwards of a year awhile), so I figure what better time than now to write about some of the things I’ve learned from curling and the impact it’s had on my life as a whole.

Where did this crazy sport come from and how did I get involved?

Curling, as a sport, draws its origins back to 16th century Scotland, where locals would play on frozen ponds and smaller lakes. Pretty much all curling is done now at indoor facilities, often on dedicated ice, which makes it a far cry from the traditional method. There’s an incredible short documentary about a town in New Zealand that still maintains the tradition of outdoor ice.

My personal history with curling goes back to 2012 when I joined the Madison Curling Club. I’d been a fan of watching curling at the Olympics and I have distinct memories of playing (or, at least, trying to) curling on both Nagano and Mario & Sonic, so when the opportunity to try it came up I jumped at the opportunity. I never could’ve guessed how much it would enrich my life, between the incredible friendships, the travel, the skill/knowledge/appreciation of the sport, and the hard life lessons you learn.

One thing I won’t cover here is what curling actually is and how it works. Curling Canada put together a great 2-minute guide/intro, which if you’re unfamiliar, might help to watch before we continue.

Always have a Plan B. And sometimes C, and D.

Calling a game of curling is an interesting, highly-specialized skillset. You need to balance overall strategy with personal preference, adapt your preferred strategy to what your opponent is playing (and how their team is performing), and you need to keep in mind how the ice is playing and what your team (and this specific thrower) is capable of. Unless you’re curling at the highest level (and even if you are), players are going to have relative strengths and weaknesses, and while you may have the ideal shot in mind, it’s not always the best idea to call that shot. This is where the notion of the “pro-side miss” in curling comes in.

When you’re looking at a situation, there’s the ideal, which we would all love to have. Reality seldom works out that way, though, so curling teaches us to have a backup plan in case things don’t work out. With experience, this actually changes the way you call a game. On any given stone, you usually have multiple options. Some of those options are riskier than others and/or require a higher level of precision. While fortune may favor the bold, you’re usually better off calling a shot that gives you options. Making that perfect control weight double promotion hit-and-roll would definitely be cool and get you some bragging rights, but missing that shot and giving up a big end is worse in the long run than playing the safe guard.

Aside from recognizing and deciding to make the safe call, the other important part is making sure everyone’s on the same page. Curling is, after all, a team sport. A good skip will communicate what the call is and usually why (especially if it isn’t obvious), as well as letting his sweepers know what Plan B, C, etc. are. It’s important your sweepers know what the objective is so they can make their own decisions (as well as communicating back to the skip and thrower).

Everything is a team effort. Constant communication is essential.

Curling has been called “the roaring game” due to the sound stones make on the ice, but there’s an entirely separate side to it. There’s a lot of yelling in curling, and most of that isn’t in encouragement or anger. In order to tell the thrower what to do, the skip needs to yell down the 164ft sheet of ice (often over the sound of other games). As a stone is being delivered, there’s a lot more yelling going on. Sweepers are communicating back to the skip how far they think the stone will go; the skip and thrower communicate how accurate they think the throw is with each other; the skip communicates with the sweepers as to whether they need to sweep or not. Sometimes these are all happening at the same time, and multiplying that by the number of games happening at once (anywhere from 2 to 6, typically) and you have a lot of noise going on.

All of that noise is important, though. The trajectory of a curling stone can change by the millisecond, so while it may seem like it’s in vain, a second difference in getting on or off a sweep call can be the difference between triumph and tragedy. On the flip side, an accurate (and up-to-date) weight call from sweepers can let a skip know if they should stay the course or if they need to move onto a backup plan. One of my favorite moments in curling is when the stone is delivered and both sweepers remain silent (probably due to being unsure what to call). You’ll hear some really inventive, creative language out of the skip on the far end in those instances.

Never Give Up On A Stone

Things might look grim but you never know how the ice is playing.

To contrast one of my favorite moments in curling, we have one of my least favorite: when players give up on a stone. “Never mind” is the worst thing a skip can say to their team. Except in incredibly rare situations (e.g. after a stone has already picked and is heading for the side wall), I personally think you shouldn’t give up on a stone until it comes to rest. I’ve seen some crazy things happen on ice (including the infamous S-curve), and you never know when a shot initially looks catastrophic suddenly finds a line that it likes or picks and comes back into play.

Sometimes, in curling, you’ll get those crazy breaks. You’ll get a stone that just happens to run perfectly and your opponent, who tries the same thing, just can’t make the shot. Sometimes it goes the opposite way, and nothing you or your team does works out. Regardless of how pious you are, or what your religious affiliation is, everyone knows about the Curling gods. The Curling gods provides a great abstraction of all of the unpredictable, all of the variance, all of the chance in curling. It gives you an excuse when things go well and when they don’t, and it helps support one of curling’s core beliefs of humility.

At the end of the day, it’s just a game. You win some, you lose some. Teams peak at the right moment or have one bad game. What matters more is how you conduct yourself on and off the ice, and the connections you make. One of the best things about curling is the social element. After each game you’re expected to sit down with your opponents (who you may’ve just mopped the floor with), have a drink, and share good conversation. Sometimes specific parts of the game will come up, but there’s no value in showboating. This just happened to be your day.

The other curling tradition that has a soft spot in everyone’s heart is the Broomstack. At any given moment, during any game, the two skips (often, after consulting their team), can decide to take a break in order to “socialize”. This is commonly understood to be a drinking break, where teams will stack their brooms (which is somewhat of a feat in and of itself) and go off to take a few sips of beer or a quick shot of something, and to mentally regroup. While this may be furthering curling’s reputation as a drinking sport, it’s part of what makes curling unique, and it’s why so many people love it.

Curling isn’t just a game. It’s a way of life. Once a curler, always a curler.

And, for no good reason, here’s a gif of Matt Hamilton. There are plenty more where that came from in case you want to add a little character (and mustache) to your reaction gifs.